Diffusion is the incoherent movement of molecules resulting from random motion - Brownian motion. The random movement of fluid molecules makes them spread out until a boundary stops them. In general, extracellular water molecules have a larger displacement than intracellular molecules, as the latter have more chances to collide with cell walls, organelles, macromolecules. Diseases and pathologies may either increase or hinder the displacement of water in tissues which can be quantified using MRI. Information of microstructure can be obtained (e.g. axon diameter, tissue anisotropy) contributing to the understanding of the physiology and the underlying processes that precede the beginning of pathologies. 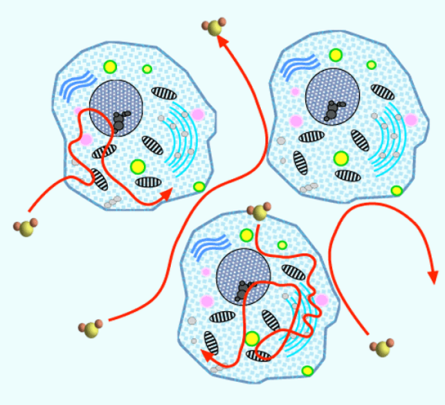 Figure 1 - Diffusion of water molecules (red arrows) is hindered in the intracellular compartment due to the presence of macromolecules - Courtesy of Allen D. Elster, MRIquestions.com.

DWI is an MR imaging technique sensitive to the random Brownian motion of water molecules within a voxel of tissue. The range of displacements measured with DWI is typically in the order of 1–20 μm allowing quantitative measurements that reflect micro-morphological and physiological changes in tissues. In DWI, the contrast is based on the displacement of water molecules, whereby voxels where molecules present a larger motion appear darker on the image. Sensitisation to diffusion can be achieved by using an extra pair of magnetic field gradients during the acquisition, generating images with varying degrees of diffusion-weighting. The degree of diffusion weighting depends on the area of the extra pair of gradients (amplitude G and duration δ) as well as the time spacing between them (Δ) referred to as b-value (b=(γ&deltaG)^2(&Delta-δ/3)), typically quoted in s/mm2. 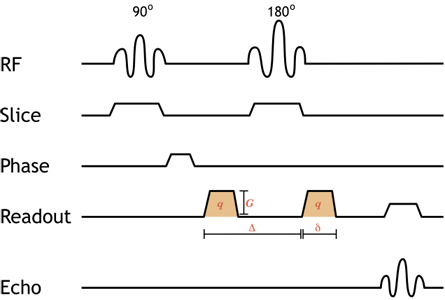 Once DWI data has been acquired, to a large degree the available choices have already been made about how the data is presented (number of b-values, gradient directions, diffusion times) and analysis is a purely mathematical process that can be performed ‘manually’ using free or commercially-available software packages (including those provided by the scanner manufacturers themselves) or using routines developed in-house. The signal decay as a function of the b-value can then be analyzed using more or less complex mathematical models to quantify the diffusion parameters. Ideally, the acquisition should be designed considering the signal model one wishes to use. The simplest model considers only the apparent diffusion coefficient (ADC), reflecting the water molecule motion in the tissue averaged over one or more directions; the ADC can be estimating on a pixel-by-pixel basis by fitting a mono-exponential curve to the diffusion-weighted signal as a function of b-value. Diffusion imaging processing, range from simple apparent diffusion coefficient (ADC) through to more complex models including intravoxel incoherent motion (IVIM), diffusion tensor imaging (DTI) and beyond.

Many toolboxes have aimed to standardize the analysis, providing more transparency to the analysis processes. Many different algorithms have been implemented providing the users a lot of freedom when choosing how to perform their diffusion image analysis.